57: “For me it was like a calling…I learned to live in truth in myself.” (ft. Randy Quarterman & Sarah Eisner)

57: “For me it was like a calling…I learned to live in truth in myself.” (ft. Randy Quarterman & Sarah Eisner)

Join guests Randy Quarterman & Sarah Eisner for a discussion about making love and justice through truth-telling and reparations. Randy and Sarah are the founders of The Reparations Project, an organization that is working to close the wealth gap between Black and white Americans by centering descendants of those who were enslaved and supporting descendant families of enslavers to pursue ancestral healing through repairing generational harm.

Welcome to a conversation about making love and justice through redress and reparation.

Sarah Eisner is the 3x great-granddaughter of George Adam Keller, a man who enslaved and then gave reparations land to Zeke Quarterman in Coastal Georgia. Sarah was born, raised, and still lives in Northern California, where she is a mother, recovering tech entrepreneur, writer, and co-founder, along with Randy Quarterman, of The Reparations Project. 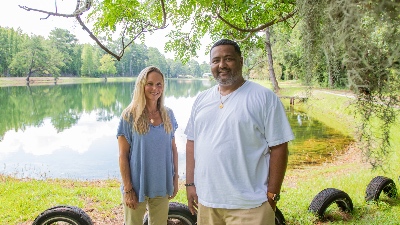 Take The Pledge to support personal and national reparations

From Randy: “I chose this song because either we keep watching the world go by while the time go by or we adapt to the change and learn more about ourselves to heal this world one person at a time.”