11/20/2018
Join guest Professor David Kyuman Kim for a conversation about the radical art of love in public, love in politics, and the heart (and hard) work required for both. Professor Kim’s current work explores the infusion of love into politics and political discourse, through his leadership at the Love-Driven Politics collective and through his current book project “The Public Life of Love.”

Welcome to a conversation about making love in politics, in political discourse, and in public.

David Kyuman Kim is Professor of Religious Studies and American Studies at Connecticut College, where he served as the College’s Inaugural Director of the Center for the Comparative Study of Race and Ethnicity. Published widely on religion and public life, political theory, and the Asian American religious experience, Kim is author of Melancholic Freedom: Agency and the Spirit of Politics (Oxford 2007), and co- editor of The Post-Secular in Question (NYU 2012) and of a special issue of The ANNALS of the American Academy of Political and Social Science on race, religion, and late democracy.

Kim has served as Senior Advisor to the Social Science Research Council’s Program on Religion and the Public Sphere. He was also Editor-at-Large of The Immanent Frame, the SSRC’s blog on secularism, religion, and the public sphere. With John L. Jackson, Kim is co-editor of the Stanford University Press book series RaceReligion. In 2007, Kim became Creative Consultant and Scholar-in-Residence for David Dorfman Dance and has been a core part of the company’s creative team. In 2009, he was the Inaugural Visiting Professor of the Humanities at the Cogut Center for the Humanities at Brown University.

Kim is co-convener of the Love-Driven Politics Collective, a group of scholars, artists, and social justice activists dedicated to responding to the political evil, acrimony, anger, and cynicism of our times by cultivating a common politics animated by compassion, generosity, and mercy. The Love-Driven Politics Collective is also a core partner of the Empathy Lab, a collaborative project sponsored by Columbia University’s Digital Storytelling Lab and Refinery29. A Co-Producer with the Kindling Group (Chicago) of the documentary project Prophetic Voices, a digital series highlighting secular and religious prophets and progressive organizations across the U.S., Kim is in wide-demand as a public speaker and praised by Cornel West as “the leading philosopher of religion and culture of his generation.” Kim’s current book project is The Public Life of Love. 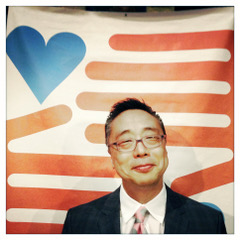